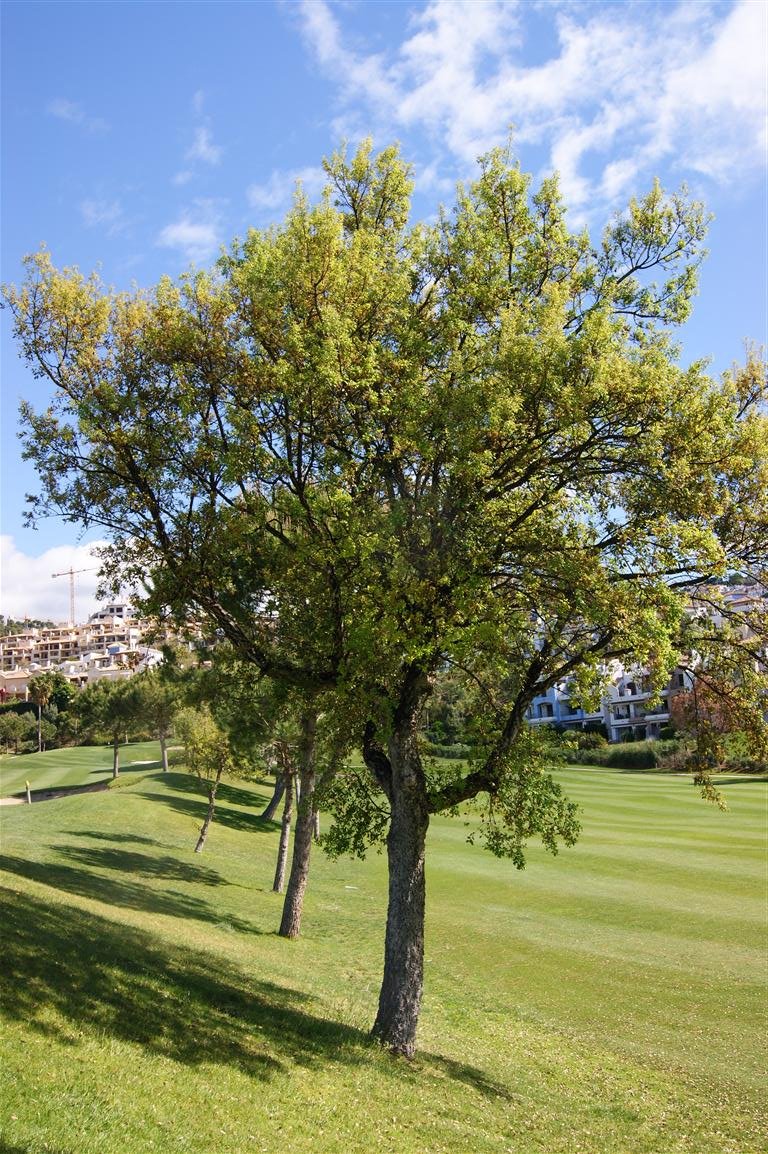 Currently the inventory of our native trees on the golf course are: Pinaster Pine (Pinus pinaster) 267 units [In Spain, highlights the region of the Sierra de Segura, to represent extremely large and populous forests and historically to produce the best specimens for the one-piece construction of the masts of the sailboats. Therefore also been called maritime pine as “maritime” and that is why the Sierra de Segura was declared Maritime Province in the eighteenth century to the early nineteenth.], Stone Pine (Pinus pinea) 205 units [His name, “piñonero” comes from its pine nut produced by large pine consumed by mankind since time immemorial. The seed (pine nut) is used in baking, in salad garnish, or in dishes such Tayin sauce that blends sweet and savory. The seed comes in many Mediterranean dishes. It had earlier reputation as an aphrodisiac. Spain is the leading producer of these pine nuts thanks to the town of San Esteban Pedrajas  in the region of Tierra de Pinares, in Valladolid, which produces an important amount of pine nuts with its endless pine forests], Aleppo pine (Pinus halepensis) 136 units [Along with the oaks, was the wood most used by the Romans and Carthaginians for the construction of their boats], Canary Pine (Pinus canariensis) 267 units [Its a conifer endemic to the Canary Islands. The Canary Island pine is considered, under a law of the Canary Islands, the natural symbol of the island of La Palma. The mature tree can grow to over 40 m high and 2.5 m in diameter trunk. Another important characteristic is its resistance to fire thanks in part to the large corky layer, which covers their trunks which isolates it from heat and flame], Quejigo (Quercus faginea) 9 units, Cork oak (Quercus suber) 21 units [It has a thick and rough bark, which is the cork, it is noteworthy that the use of which is mainly used to seal bottles of alcoholic beverages such as wines, spirits and champagne or champagne], and Wild Olive (Olea europaea) 294 units [The olive tree is the ordinary symbol of peace. It was dedicated to Minerva, for which reason it is seen in many monuments with an olive branch in his hand from where it was given the name Pacífera. The olive tree, considered as a symbol of peace, was also of victory and of chastity. The newlyweds took in Rome olive garlands or wreaths and crowned him also with the dead that led to the pyre. It was also the attribute of the warriors and the prize winners of the winners at the Olympic Games],

As for other native species listed in our golf course are the following: Kermes oak (Quercus coccifera), Mastic (Pistacia lentiscus), Cornicabra (pistancia terebinthus), Romero (rosamarinus officinalis), Enea (thypa dominguensis), Reed (Arundo donax), Retama (Retama monosperma) and Blackberry (Rubus ulimfolius). And as for non-native (foreign species) we have a total of 33 species recorded in our inventories of plant species.