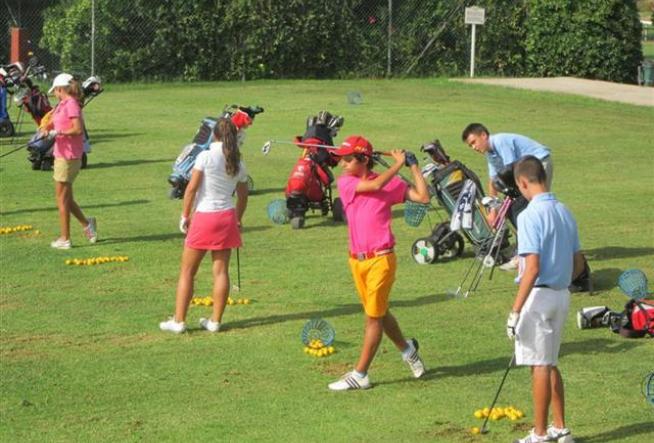 Los Arqueros Golf hosted recently on site a two days concentration for the Andalusian Golf Federation Youth Team, for training sessions on its Driving Range and rounds of golf out on the Course.

The Youth Committee, headed by Manuel Garcia Garvayo, celebrates over 100 competitions a year and approximately 60 concentrations between Training Centers and other resorts. Currently there are seven sites of Training Centers Tecnificación in Andalucia, where a hundred players learn golf techniques and prepare for competitions in Andalusia, national and international.

The excellent results achieved by these players in 2011 have led to Andalucia to take the top ranking of Territorial Federations. This data confirms that Andalucia is an ideal place to practice golf, great facilities, golf resorts and the birthplace of great players.

Among the main reasons that have led to Andalucia to lead this top 10 is the formidable role of Andalusian combined in Infantil International, Sub 25 Male and Cadet. With names Mario Galiano own highlights. Extraordinary player from the Guadiario area, which has added many important results, among them was the Junior International Championship of Spain, and second place in the Championship of Spain Cadet.

Other prominent figures are Peter Martin and Scott William Fernandez, champions of Spain Junior and Benjamin, Maria Parra and Carlos Leandro as top positions in the National Youth scoring. A total of 30 players who have contributed their scoring to the Royal Andalusian Golf Federation close in the first post of the new Territorial Federations rankings. Note that this ranking takes into account 27 national competitions belonging to the Committees Male, Female and Youth, which provides a number of points based on the position held by each player or team, in the case of inter-territorial Champions.

We here from Los Arqueros Golf we wish them luck and encouragement to continue this year as well with the same good results and ranking.